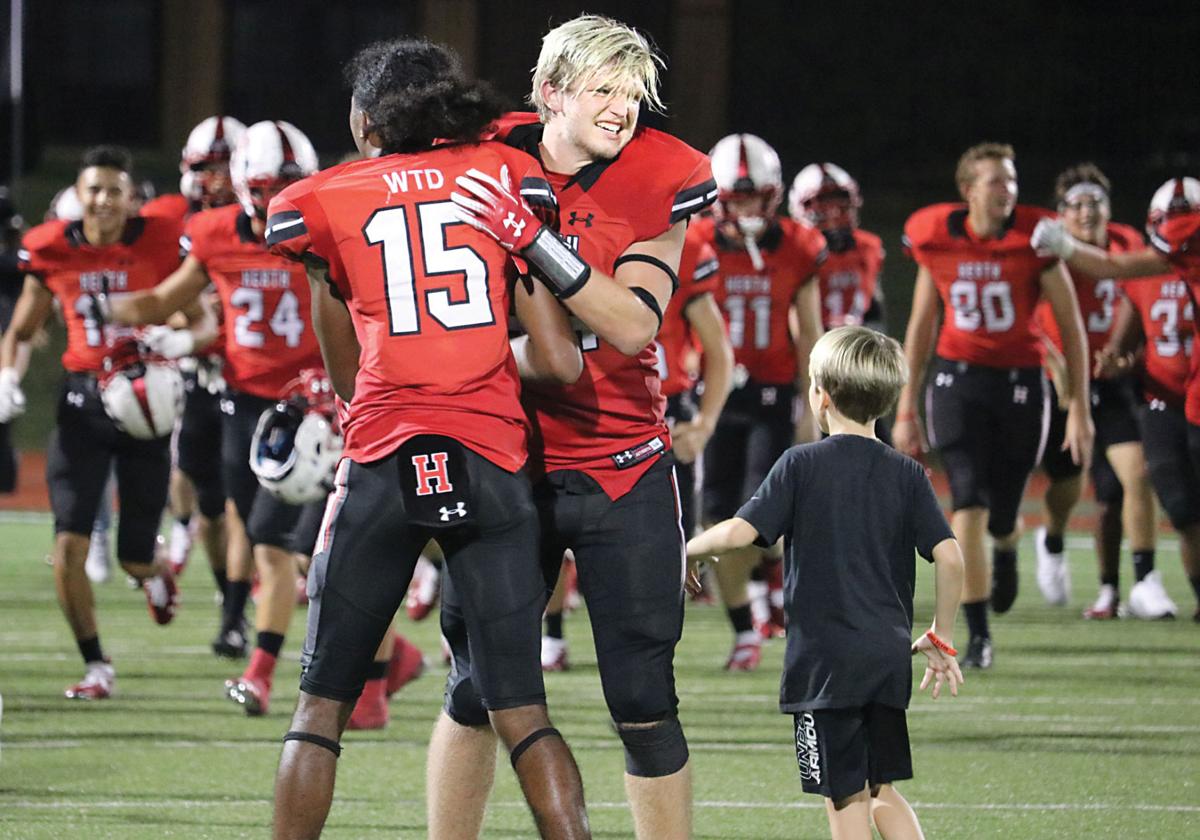 The Heath Hawks celebrate their double overtime victory over Wylie on Friday night. 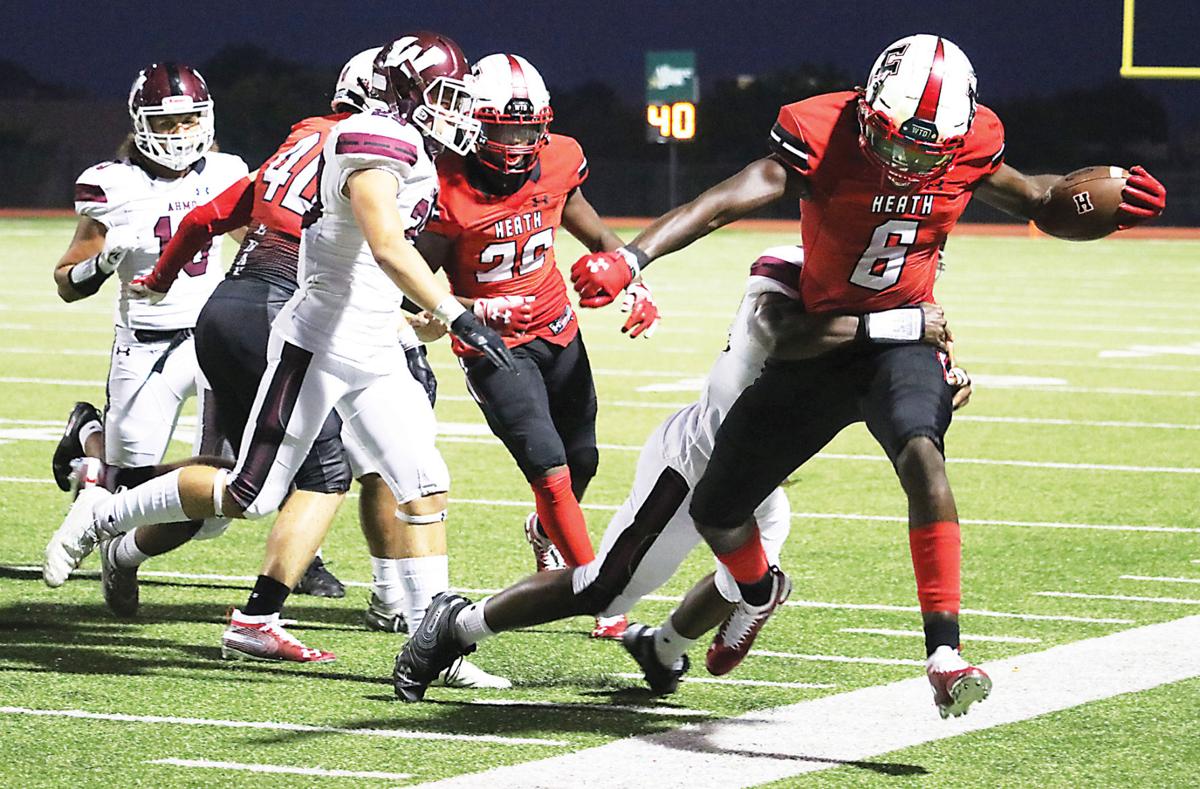 Jayden Jones of Heath hangs on to the ball as he's pushed to the sidelines during the Hawks' win over Wylie. 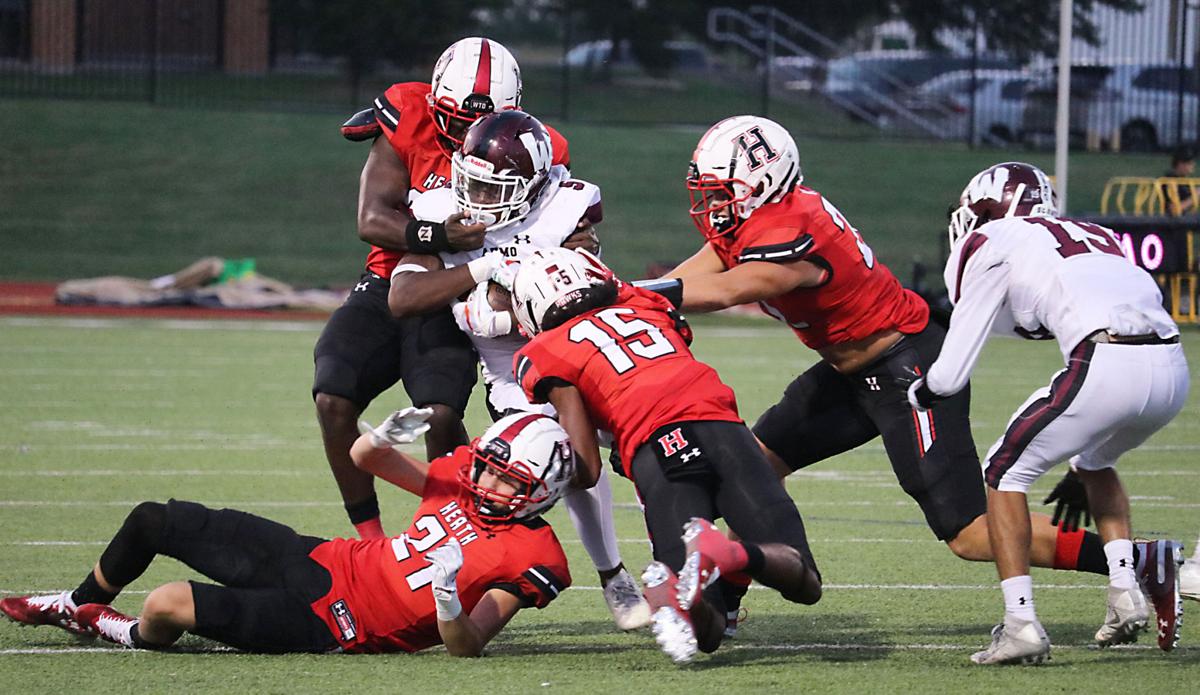 The Heath Hawks celebrate their double overtime victory over Wylie on Friday night.

Jayden Jones of Heath hangs on to the ball as he's pushed to the sidelines during the Hawks' win over Wylie.

Rockwall-Heath, off to a 2-0 start in football for the first time since 2015, will take on winless Richland on Friday.

The opening kickoff is set for 7:30 p.m. at the Birdville Fine Arts/Athletics Complex, where the Rebels will be celebrating homecoming.

The Hawks, who opened with a 38-10 win over Keller Timber Creek, outlasted Wylie 44-41 in two overtimes last week at Wilkerson-Sanders after the Pirates rallied from a 31-10 deficit to tie the game. Both teams scored a touchdown and an extra point in the first overtime. The Hawks held Wylie to a 38-yard field goal in the second overtime and then scored a touchdown on a 25-yard pass from Josh Hoover to Jayden Jones to end the game in dramatic fashion.

Hoover’s completed 75 percent of his passes for the season, going 36-of-48 for 782 yards, eight touchdowns and no interceptions. His quarterback rating for the season is 156.3.

Jones led the Hawk receivers with eight catches for 175 yards, including touchdowns of 59 and 25 yards, while Corban Cleveland caught seven for 117 yards and two TDs, Casey Curtin caught four for 88 and one TD. Trey Graves snagged four passes for 36.

Jones leads the Hawks for the season with 11 catches for 284 yards, including a 98-yarder in the season opener.

Cleveland’s caught eight for 133 yards and Curtin has caught seven for 183 yards.

Sophomore Zach Evans leads the Hawk rushers for the season with 138 yards on 30 carries.

Richland won last year’s game 28-14 in Rockwall on the way to a 4-6 season record. The Rebels tied for fourth place with Abilene and Weatherford in District 3-6A last season but missed the playoffs due to a tiebreaker.