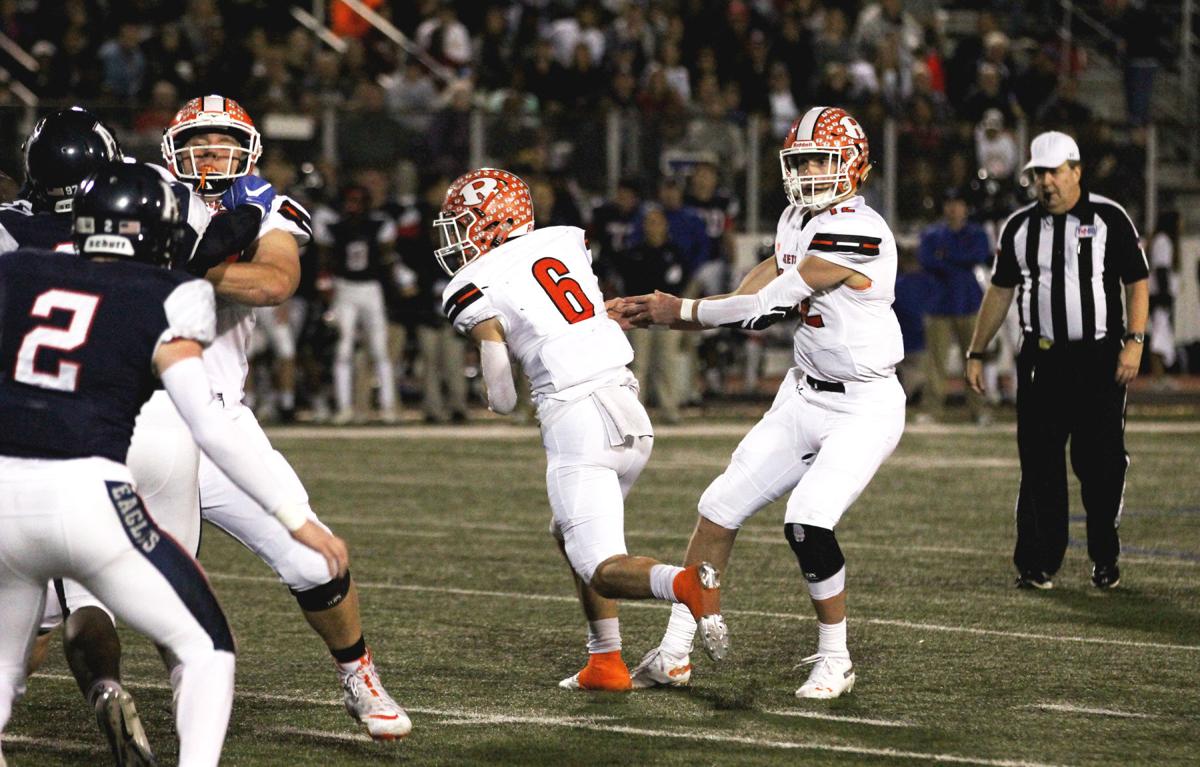 Senior quarterback Jacob Clark (12) hands off the ball to running back Zach Henry (6). 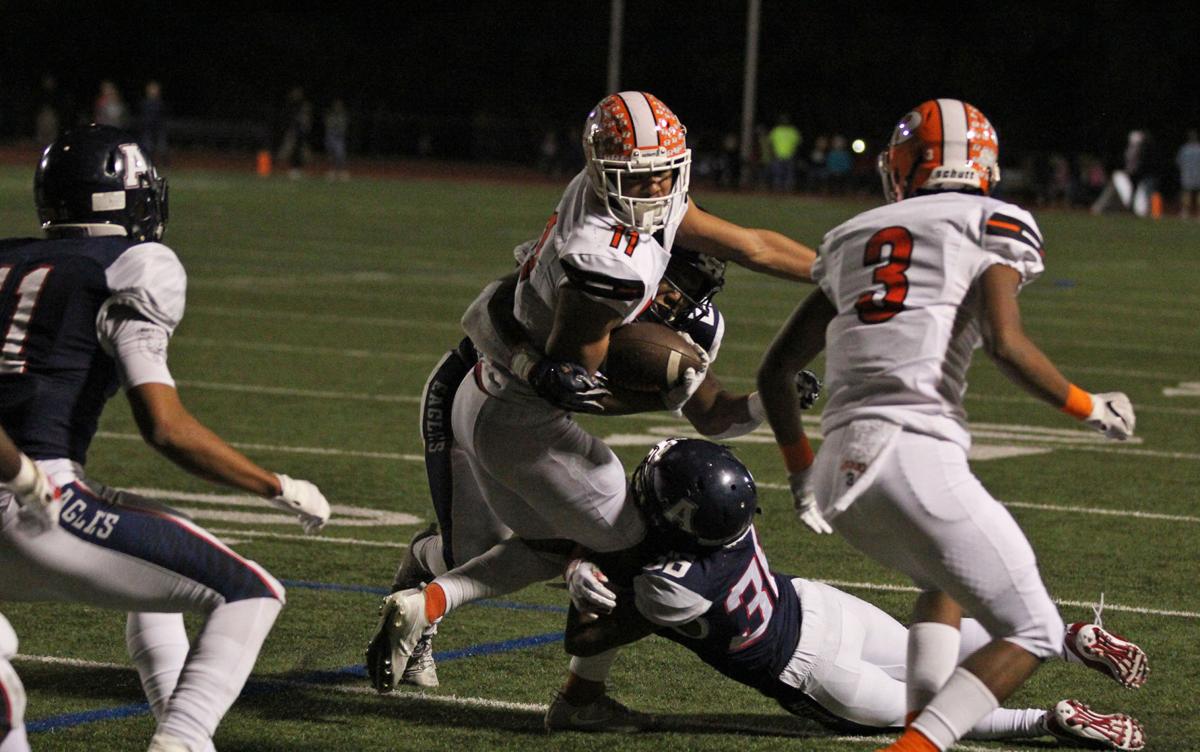 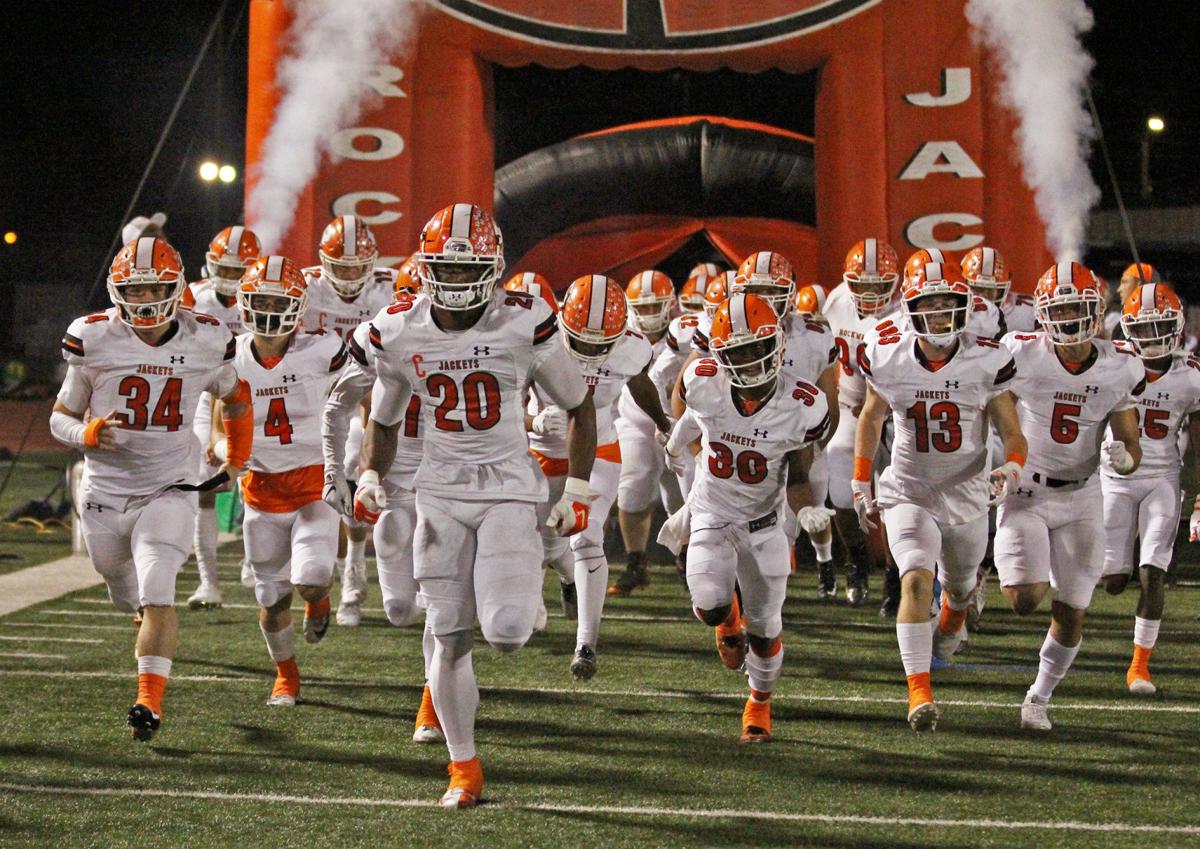 In keeping with much of the season, senior safety Anfernee Orji (20) led the Jackets onto the field before the first whistle and after halftime. 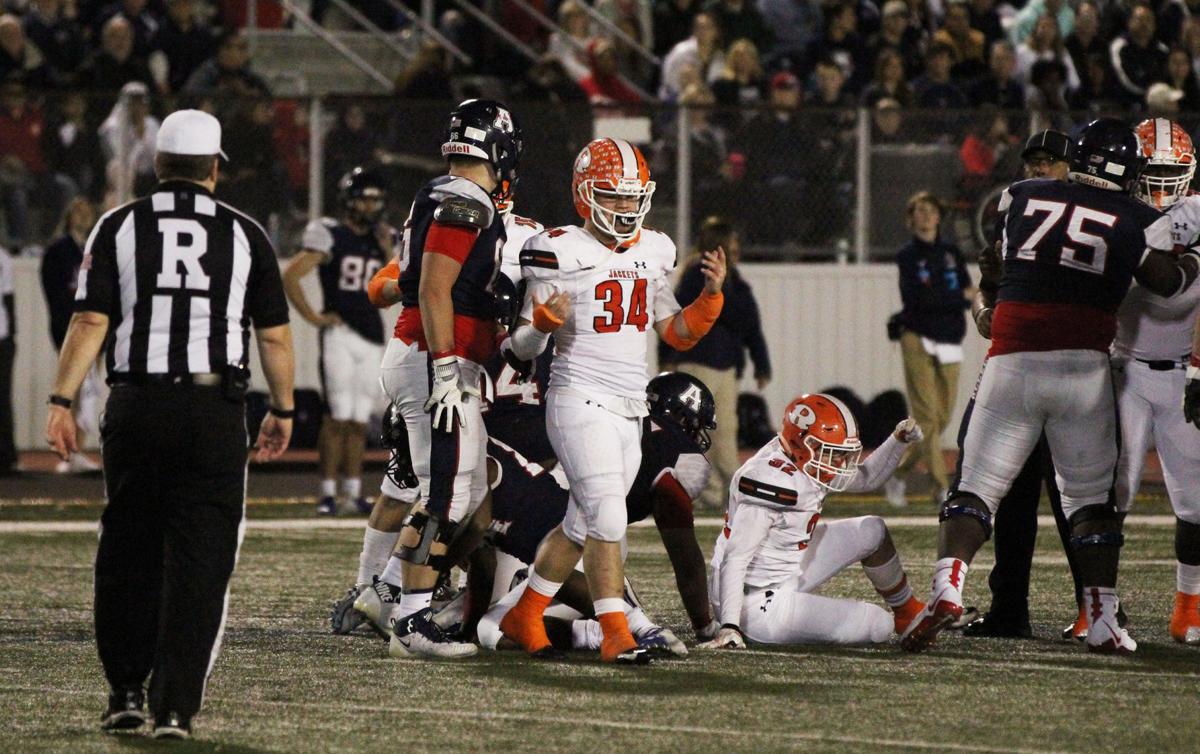 Senior defensive end Rocky Hill (34) walks triumphantly away from a crucial tackle in the fourth quarter.

Senior quarterback Jacob Clark (12) hands off the ball to running back Zach Henry (6).

In keeping with much of the season, senior safety Anfernee Orji (20) led the Jackets onto the field before the first whistle and after halftime.

Senior defensive end Rocky Hill (34) walks triumphantly away from a crucial tackle in the fourth quarter.

The Rockwall High School Yellowjackets (8-3, 5-1) made a more than admirable showing Friday night, ultimately falling to the reigning state champion Allen Eagles (12-0, 7-0) in a 52-40 high-scoring slugfest with over 1,100 combined yards of offense between the two teams.

The Eagles go on to face The Woodlands this Saturday in Waco. The undefeated Eagles have not lost a single game since falling to the Woodlands in the 2016 state semifinals, now 28 games ago.

“I feel like our team achieved one-hundred percent of what they were capable of this season, and we’re very proud of them for that,” Rockwall head coach Rodney Webb said.

Webb added that, in his estimation, his current group will go down as one of the “great senior classes” in Rockwall High School history.

Senior quarterback Jacob Clark, a Minnesota commit, grinded out 447 passing yards of offense, far surpassing his 271 yards per game career average, and against one of the state’s most stalwart defenses.

As with nearly every game this season, Clark’s potency with an airborne football would not have been complete without the receiving of junior Jaxon Smith-Njigba, already committed to Ohio State University.

Smith-Njigba racked up 231 receiving yards in the first half alone, but unfortunately for the Jackets, he was benched with a minor injury for a short time in the third quarter.

Smith-Njigba’s brief absence and Allen’s renewed fervor post-halftime gave the Eagles a better opportunity to stall Jacket screens, and the momentum shifted for the rest of the game.

The Jackets went on to score another touchdown, a Clark keeper following a grindy drive that included excellent timeout usage by Webb.

As high-scoring as the game was, both teams’ defenses still performed admirably in the face of powerhouse offenses – senior safety Anfernee Orji garnered 14 total solo and assisted tackles, with senior linebacker Riley Pevler close behind with nine solos and one assist. Both have been mainstays of the Jacket defense this season and will be sorely missed next year.

Going toe-to-toe with one of the most stacked teams in the state is no small feat, and none of that is lost on Coach Webb.

“The three teams that we lost to (Highland Park, Longview and now Allen) have a combined 36 to 0 record,” Webb said. “That says a lot, and I’m so proud of this team and what they accomplished.”

Prospects for next season look strong for the Jackets as well, with many of this year’s most talented players going into their senior year for the 2019-20 season, including Smith-Njigba, running backs Zach Henry and Khalil Catlett, wide receiver JJ Williams and others.

While it remains to be seen how easily Smith-Njigba will adapt to a new quarterback-receiver partnership, his results this season are unquestionable: the dynamic and light-footed junior put up an average of 165.4 receiving yards per game, including clearing the 220-yard mark with ease against the three aforementioned opponents.

Henry came up just shy of 1,000 total rushing yards for this season and an average of 98.3 yards per game. Against Allen, Henry racked up 118 rushing yards in 24 carries.