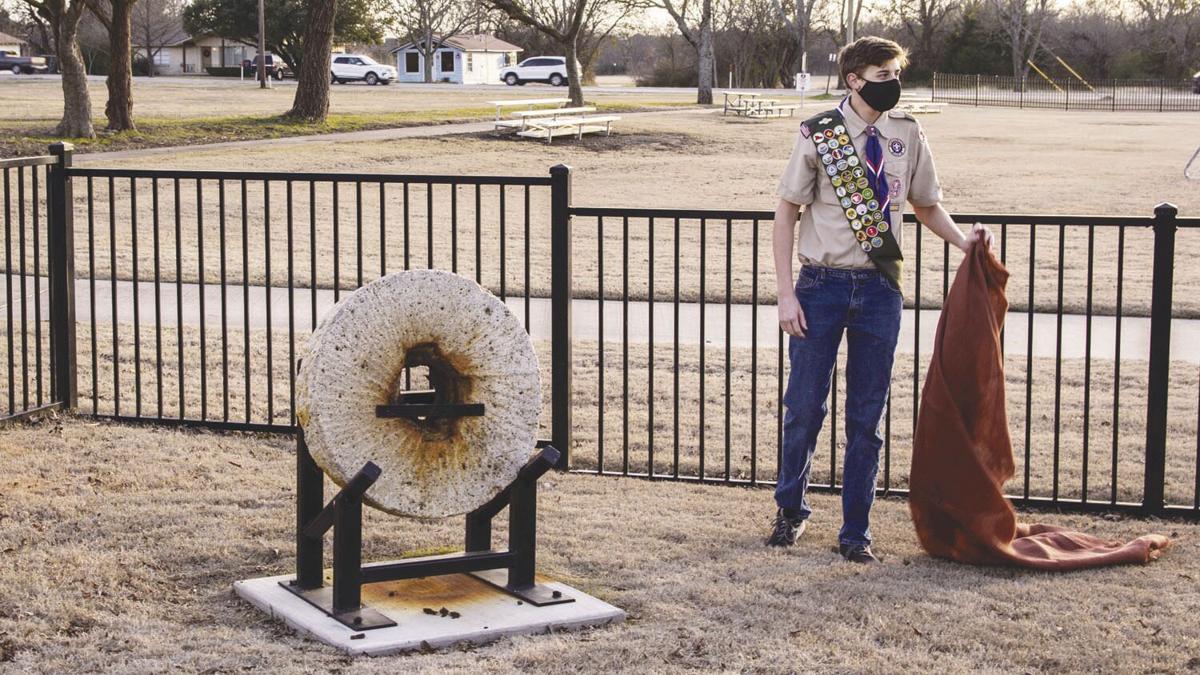 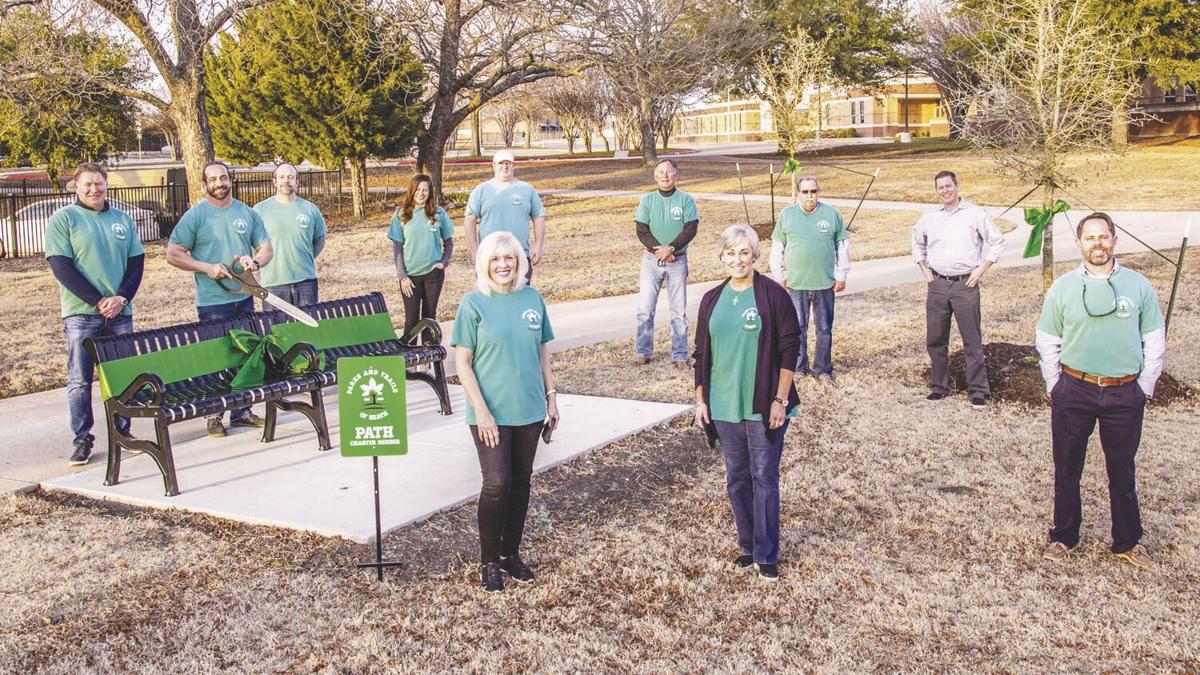 It was a small and safe gathering of Heath citizens with big hearts for service at the dedication ceremony held Jan. 28 in Towne Center Park to commemorate the completion of the first Parks And Trails of Heath (PATH) project and the preservation of a historic grist mill stone.

“We recognize the past so that we can connect it to the present. It is what creates and brings communities together,” said Mayor Kelson Elam as he welcomed members of the city council, park board, Heath Economic Development /Municipal Benefit Corporations (HEDC/HMBC) and Boy Scout Troop 314.

During the program, Park Board Chairman Mark King said that the PATH program was developed by the board to provide citizens an opportunity to help expand amenities in Heath’s parks.

“We have wonderful parks, but need to enhance the amenities,” he said. “PATH offers a way for citizens to participate in this effort financially. We’re very pleased to have raised enough funding to complete our first project within the program’s first year.” The Phase 1 PATH project involved increasing the shade in Towne Center Park, which was a request by citizens during the community engagement process of developing the 2018 city of Heath Parks and Trails Master Plan. Twenty-five mature shade trees were installed along with high quality park benches. A water bottle filler with a pet bowl is also being installed.

Instrumental to the success of PATH are the major contributors, which include the HEDC/HMBC and Impact Selector International (ISI), a global company headquartered in Heath. David Lane is the president of the HEDC/HMBC and the CEO of ISI. “The mission of the HEDC and HMBC is to expand our local sales tax base and to re-invest those sales tax dollars into Heath’s quality of life,” Lane explained. “PATH is a great way to involve local companies, citizens and the city of Heath in creating a public and private partnership together for our city’s future. Hopefully this is a model to be replicated to endorse such a great collaborative effort.” The HEDC/HEMBC has unanimously voted for the past three years to dedicate 25 percent of its annual sales tax revenue to Park and Community Improvement Projects, and as a result, is the top contributor to PATH.

“This program speaks to the vision of our company,” he said. “We are based here, we live here and we want to be a part of helping Heath continue to be the wonderful hometown that it is.”

Making significant contributions to PATH in its charter year – along with citizens who signed up for a recurring contribution of $5 or $10 with their monthly utility bill are the $1,000 level PATH Funders: Bill and Barbara Bottorff; Heath Flag Service/Burrow Family; Rhonda Holloway; Magnum Home Service; Malouf Interests, Inc.; The UPS Store – Heath; Tom Thumb; and Vicki Wallace.

You can find a complete list of citizens supporting PATH and learn more about joining the effort at: www.heathtx.com/path.

Towne Center Park now also features a historic grist mill stone that was brought to Heath by one of its earliest settlers in the 1800s, the James Kyser family, who had a hand-driven grist mill that they shared with fellow settlers to grind corn and other grains into flour.  The grist mill stone was discovered by Heath resident, Gary Fate, in a pile of concrete rubble at the intersection of FM 740 and Laurence Road near the location of the old Brady’s Country Store during the FM 740 widening project in 2014.  Fate brought the stone’s attention to the city, and Public Works rescued it and stored it at the department’s facility. The grist mill stone remained at the Public Works facility until Fate wrote Mayor Elam about the stone last year, and his belief that it is important to share this historical artifact with the community.

The mayor assigned its preservation to the Park Board. At the same time, the city was in communication with Boy Scout, Kevin Harvey, who was seeking an Eagle Scout project. To make a long story short, the two projects were married together.

Harvey designed and installed an iron display for the stone behind city hall; Public Works moved it over; and the city installed a sign telling the grist mill stone’s story. Elam introduced Harvey during the program, who unveiled his display and thanked fellow Boy Scouts in attendance who helped him. The stone is located behind city hall.