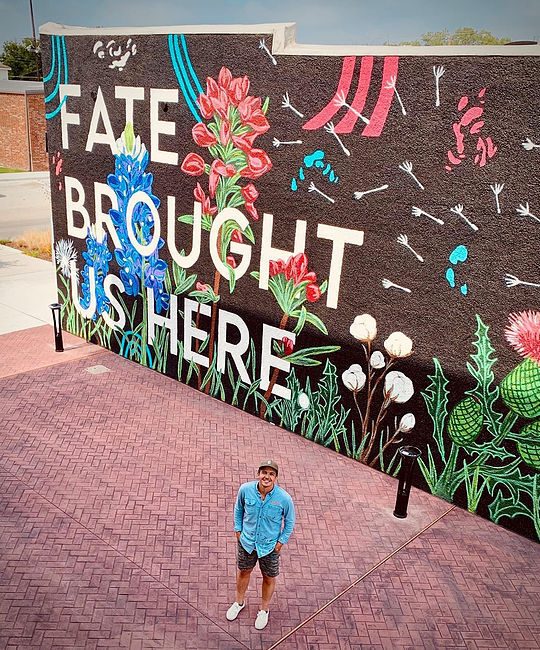 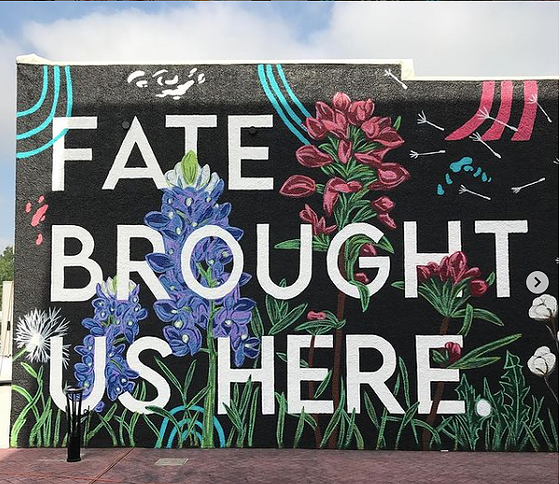 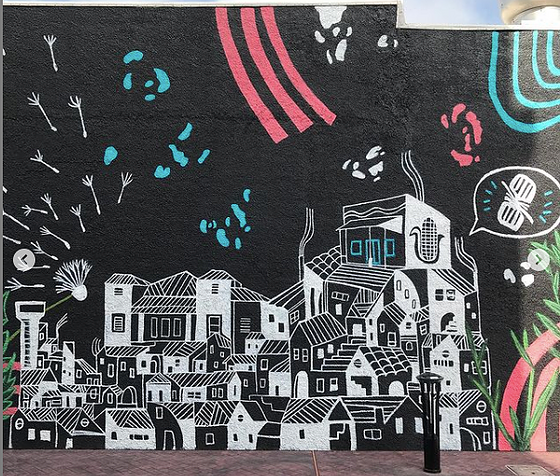 On a warm and sunny North Texas afternoon, families gathered, children ate ice-cream and teenagers were found taking selfies in front of the grand wall. Each passively appreciating the art around them.

‘Fate Brought Us Here,’ read the large mural covering an entire exterior building in the center of the courtyard. The vibrant flowers of the mural seemingly danced off the wall with wind.

Many have wondered, “Who is the mastermind behind this iconic centerpiece and focal point for downtown Fate, Texas?”

Caleb Jacks is a freelance artist, art teacher and the face behind the iconic painting. Caleb was born in Greenville, just a short drive from Fate. His grandmother was a seamstress and also dabbled in oil paintings.  It was clear from a young age that a familial artistic spark was ignited. Caleb’s brother and sister are also artists in their own right.

But art wasn’t just a hobby for Caleb. When he began to struggle in school, artistic visual aids helped him with reading and thriving in spite of a dyslexia diagnosis. Today, he is an art teacher and creator of many murals and pieces throughout the DFW area.

It took Caleb over two weeks to create his masterpiece on the side of “Along Came Tamale,”

a local favorite, in the downtown Fate area. The owner of which also came up with the fitting mural title.

The process of creating a design of this size is quite fascinating and complex from the planning stages to implementing the final product. Caleb began by making the entire wall black, creating a blank canvas to bring forth his vision. To date, this is the largest mural he has created.

Working in the Texas heat provided a unique set of challenges. Caleb worked early mornings and as the sun shifted its course in the sky, so did the shadows on his painting. He came back after dusk and used a projector to get all of the details of the letter spacing and floral design just right.

Caleb has a strong interest in skateboarding and sketchbook graffiti. He learned more about graphic design and development in college which led him to use a layering technique to create the finished effect. Despite it being Caleb’s first time using it as a medium, the mural is over 90% spray paint.

On his personal website, there are numerous designs with different techniques ranging from private family portraits to large commissioned pieces. Caleb is very adaptable with skills and styles under the umbrella of illustrations combining them to create something uniquely his own.

The details of the Fate mural include Texas wildflowers, cotton, and buildings inspired by 1940s cartoon illustrations and abstract art. Ironically, the cotton was added at the end of the process to balance the space, but it fit perfectly with Fate’s longstanding history including cotton farms and its first cotton gin in the mid 1880’s.

Caleb shared that as he was working, so many conversations were started. People from all walks of life were curious about what was being created. Art, like this mural, breathes new life into old buildings. It preserves the past while making a way for the future.

“The mural adds a youthfulness to the area” Caleb said when asked about the impact of art on society.  It adds novelty and rejuvenation that tells the story of the city in a new way. It can bring conversations, consumers, and visitors to a central area.

The buildings are long standing pieces of downtown fate, with a fresh look that matches the incoming population as Fate continues to boom with new growth and development.

Population has increased by 192.6% since the last census in 2010, according to worldpopulationview.com. It is projected to continue at a rate of 8.77% annually, bringing in record numbers of new residents to the quaint city of Fate.

The city is making strong efforts with their downtown revitalization plans and new businesses such as Fresh by Brookshires, Sauce and Vine and Pizza Factory, are currently in the works.

There is an idiom used time and again throughout history. “Bloom where you are planted.” The graphic artist, Mary Engelbreight, made popular in her book, The Art and the Artist, published in 1996. The mural depicts a fragrant reminder, similar to the quote, that we can celebrate the rich history and embrace the new change and imminent growth in our community.

There is beauty all around us. Caleb truly captured some of the beauty of this charming town in his mural. Art has a supernatural way of connecting and inspiring people. From the up and coming artists to the passersby and members of the community who feel, if only for a moment, that Fate Brought them here.

For more work by the artist, visit calebjacks.com

Tom, age 75, passed away on November 14, 2021 in his Poetry home following a 3-year battle with cancer. He is survived by his wife, Telma, and three daughters, Morgan, Meredith and Mallory.

Rockwall, TexasRobert Wayne (Bob) Munn, 85, of Rockwall, Texas passed away at his family home after a short battle with cancer on October 27th, 2021. Bob spent his childhood in Quinton, Oklahoma before relocating to Houston, Texas., Muskogee, Oklahoma, and finally residing in Rockwall. Bob w…